In June, the US central bank, the Federal Reserve, increased short term interest rates for the second time this year and the fourth time since December 2015. The 0.25% increase to 1.00% − 1.25% had been well signalled by Fed officials, so there was no surprise. As seems to be the case these days, the focus was more on whether the next rate rise was still three months away or might be deferred. 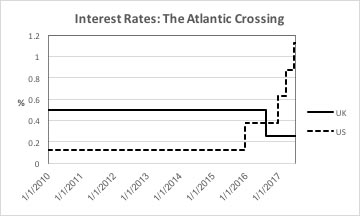 The day after the US interest rate decision it was the turn for the UK central bank, the Bank of England, to make its annoucement. This was universally expected to be another “no change”, leaving base rate at the 0.25% fixed amidst post-referendum concerns last August. The rate did remain unmoved, but there was nevertheless a major surprise: three out of the eight people charged with setting the rate voted for an increase. According to Reuters, this was the nearest the Bank has come to raising interest rates since 2007.

Does that mean the Bank’s next meeting might see the first rise in interest rates in a decade? The answer is probably no. One of the trio of rate risers will have left the Monetary Policy Committee by the time of the next meeting. Her replacement is thought to be less anxious to raise rates. A new deputy governor is also due to be appointed, bringing the Committee up to its normal quota of nine. The balance of the Committee is thus set to change.

Despite some apparent differences between the Bank’s governor, Mark Carney, and its chief economist, Andy Haldane, most experts still do not see the first base rate increase happening until 2018. That is good news if you have a variable rate mortgage, but bad news if you have a deposit account or cash ISA.

The value of your investment can go down as well as up and you may not get back the full amount you invested. Past performance is not a reliable indicator of future performance.