The burden of income tax was reduced slightly in the Budget, but anomalies remain.

The personal allowance will rise from £11,000 to £11,500 in 2016/17 and the higher rate threshold – the starting point for 40% tax – will rise by £2,000 to £45,000. While the Treasury described the increase in the higher rate threshold as “the biggest above inflation cash increase to this threshold since it was introduced by Lord Lawson in 1989”, that does not tell the whole story in a zero inflation environment. 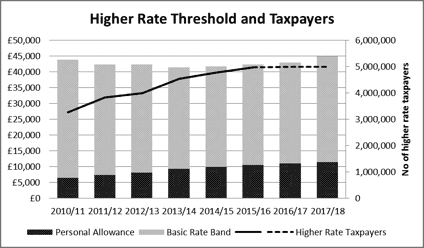 According to the Institute for Fiscal Studies, if there had been no reforms to the higher rate tax threshold rules since 2010, the number of higher rate taxpayers would now be 36% (1.8m) less than is currently the case. And higher rate tax is not the end of the story, by any means:

All of which is a reminder of that Budgets may come and go, but personal tax planning will always be necessary.

The value of tax reliefs depends on your individual circumstances. Tax laws can change. The Financial Conduct Authority does not regulate tax advice.